Meizer was conceived in the summer of 2015, when it’s founder, Krystian Machala, was cruising the neighbourhood on a sunny Saturday morning, trying to follow obscure garage sale posters. Specifically looking for an old and unique coffee table, the thought of “there has to be a good app for this” crossed his mind. Surprisingly, there were actually some apps available, but after downloading a few of them, it was apparent that they were either difficult to use, had no sales listed, were too slow, or just plain didn’t work.

An Idea Was Born

At that moment, the concept of a garage sale app that was easy-to-use, fast, had searchable content and made use of the smartphone’s technology, such as driving directions/navigation, text and messaging and the use of the built-in camera for photos and videos.

A Product Was Released!

Enter, Meizer! The design and programming for Meizer began in the fall of 2015 and by late spring of 2016, the very first version of Meizer was available for download on the Apple App Store! It has since become a great success and its community continues to grow and allow people to find great deals, post their unwanted or unused goods, all while both saving money, making money and of course meeting great people in their local area. 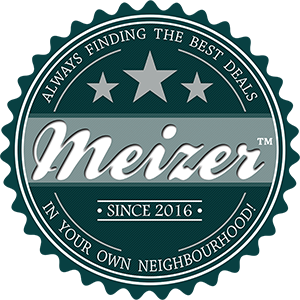 “Always Finding The Best Deals, In Your Own Neighbourhood! — Since 2016”